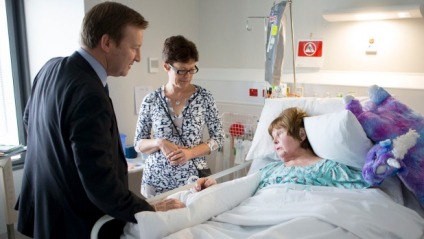 Judith Allen was trying to roll over in bed. Instead she fell on the floor, unable to move her limbs.

Six weeks after the stroke, the 75-years-old from Tawa is still in Wellington Hospital with half her body paralysed, recovering.

Her husband, Eddie Allen, said the couple had both been healthy for their age, staying active and watching their diet.

“It just strikes with such suddenness out of blue. There was no indication at all that anything was wrong,” he said.

Judith was rushed to hospital and within hours she had fallen into a drowsy semi sleep that gripped her for more than two weeks, leaving her unable to speak.

“I think the brain just goes into a holding pattern for a while to recover from the trauma,” her husband said.

Judith was one of several stroke patients at Wellington Hospital visited by Health Minister Jonathan Coleman on Thursday.  He was announcing the nationwide roll-out of new stroke diagnosis software for general practitioners, aimed at detecting the early signs of stroke.

These warning signs included transient ischemic attacks or mini strokes. The aim was to identify patients before they ended up in hospital.

About one in five people who suffer a mini stroke have a full-blown stroke within days.

Coleman said stroke was the third biggest cause of death in New Zealand and, while overall rates were not going up, it was increasingly affecting younger people and Maori. Early symptoms of a stroke were not picked up, he said, using the example of former All Black Piri Weepu’s stroke in 2014, which took weeks to diagnose.

“It will save lives … it brings simplicity and clarity to a very complex area,” Coleman said.

Whether the software would have picked up on early signs of Judith’s upcoming stroke is unknown.

Her recovery has been complicated by secondary bowel problem. She is planning to attend a family wedding in Auckland in December but her husband said that is unlikely.

Whether she will ever recovery the use of left side of her body, which she refers to as her “heavy lump”, is also uncertain.

However Judith remains determined to return to her old life, pointing to a teddy bear in the corner of her room holding a “be positive” sign.

“I will get there. The teddy tells me to be positive.”

* Stroke kills about 2500 people a year in New Zealand, making it the country’s third-biggest killer.

* Nearly one in three people who suffer a stroke die, while another third are left permanently disabled.

* The likelihood of suffering a stroke increases with unhealthy lifestyle choices. Alcohol, high salt intake, a lack of exercise and smoking can all increase your risk.

* High blood pressure is the biggest risk factor for a stroke.